PAX Unplugged 2019 breezed into Philadelphia for its third go-around, providing gamers with a weekend of all the tournaments, panels, speakers, demos, play areas and gaming that they could handle. PAXU has solidified itself as a “gamers’ game convention,” with yet another expansion and redesign of the exhibit space. This year, PAX Unplugged expanded by 33%, with major additions to the Free Play and First Look area, which just so happens to be our favorite parts of the convention. The main gaming hall & expo space was, quite literally, the largest single room ever used at a PAX convention, signaling their desire to make PAX U a Philadelphia fixture for years to come.

Here’s a run-down of some of the games we played and (mostly) enjoyed.

No Return: Es gibt kein Zurück! – This title tied for our top game of the convention. The goal is to play sets of tiles, and then buy the tiles back into your scoring area, with any tiles not purchased at end of game counting as negative points. The key to No Return is that once you start buying back tiles, you cannot play any more for potential scoring. It sounds simple, but the balance of risk and reward of your decision timing, combined with a simple ruleset, made this one a keeper. We hope there will be US availability for this one!

Hurlyburly – The second of our top games of PAX U. In Hurlyburly, you have to build up a tower of cards (a la Rhino Hero) while opponents hurl cubes at you using an ingeniously designed catapult. With the ability to add strength to your catapult, raise defenses, and steal opponents’ building components, Hurlyburly was a delightful dexterity game and a must-add to your collection. It provided us tons of laughs and fun over the course of the weekend. 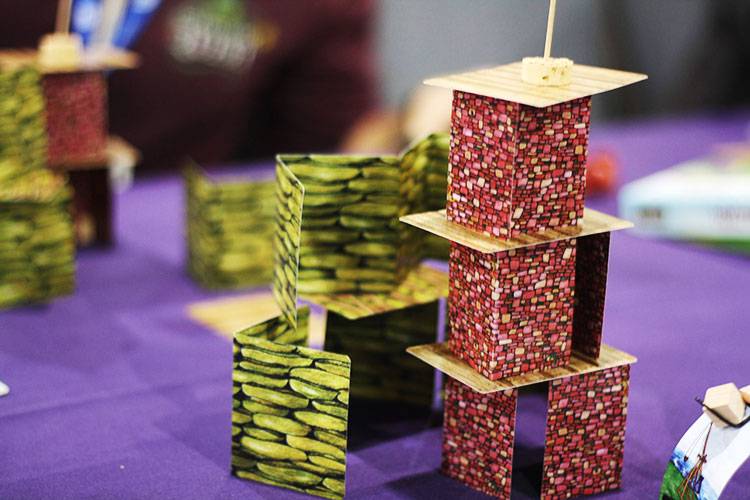 Ecos: The First Continent – The big heavy from AEG, Ecos was perhaps not the best choice to break open late at night to a table of 6 bleary-eyed players. We will not say much here (as we have a review coming soon) but we enjoyed our plays of this tile-laying and engine-building game after the convention when we got back home.

On Tour (review here) – We know Andrew really enjoys this game, but given the chance to play it in the Free Play area, we found ourselves wanting. It might be the bee’s knees for some people, but in our estimation, there are plenty of other games of this type we would rather hit the table, such as…

Cartographers (review here) – I had missed this when it hit the table at Gen Con, so I was pleased to pick it up during some Free Play time. Tahsin, ever the excellent teacher, also let slip that he had never lost in a game of Cartographers…challenge accepted! Needless to say, I emerged victorious in an engaging and surprisingly thinky roll & write. Bonus for me is that Jon purchased me a copy as my BGQ Secret Holiday Shopper, complete with colored pencils. Win! 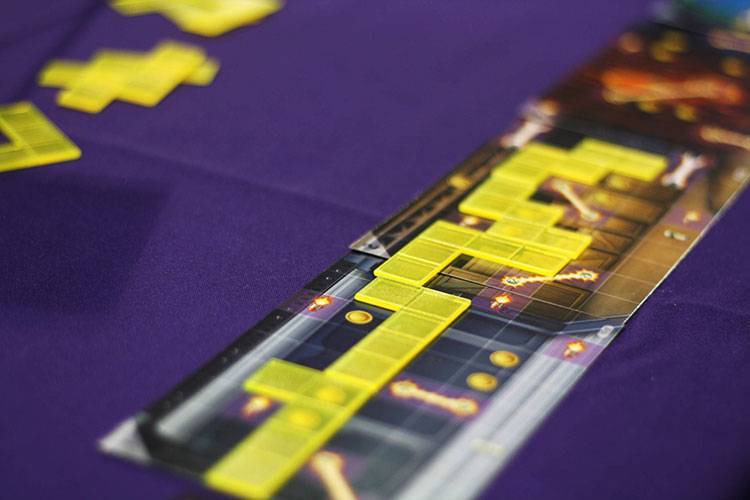 Jetpack Joyride – This game was just pure fun (we have a review coming soon). A race to place polyominos to create a path for your Jetpack Jim (I don’t know if that’s his actual name—it’s just what Jon kept calling him) was nothing short of exciting, and the various scoring goals, map tiles, and gadgets in-game kept things interesting and replayable.

Madrino – A roll & draw game out of Japan, Madrino put us in the role of architects designing a home. In each round, a series of rolls provide you walls, doors, windows, and features such as tubs, kitchens, and beds, with which you build a house. In the end, there is no set scoring, but rather you name your house and share your design with your fellow players. While it may not be a “game” in the strictest sense, the stories we told of the “Cool Tub Shack,” “Escape from the Toilet,” and “Pod Livin’” provided us quite an enjoyable time. 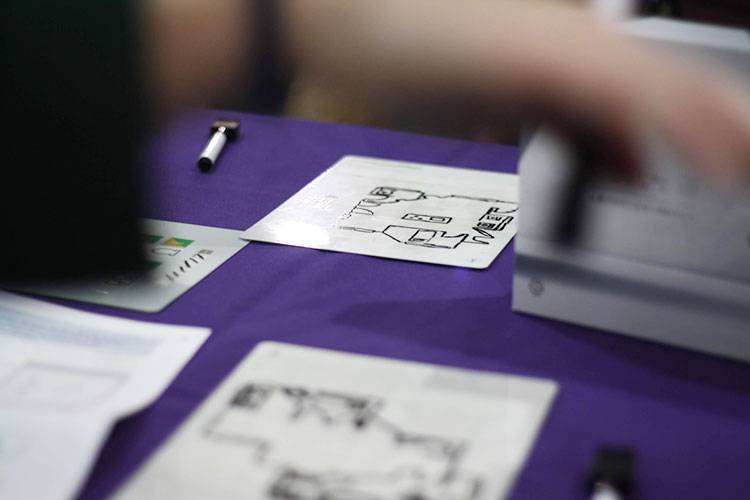 Colors of Paris – Released at Origins, Colors of Paris is part worker placement and part rondel & resource management, all in support of creating art using paint you have collected, blended, and applied to canvas. We do not want to say too much (as we are currently reviewing this title) but we can safely say we have been enjoying it.

Other quick notes on PAX Unplugged:

The pace of Philadelphia gives PAX a different feel than other gaming conventions I have attended, most notably Gen Con. While Gen Con itself is very frenetic, with lots to do, the city of Indianapolis is very mellow and steady. Compare that with PAXU, a convention that is smack in the middle of the busiest section of Philly, which necessitates a good amount of planning and awareness. For all the scheduling that has to be done at Gen Con, an equal amount of time needs to be devoted to the activities and experience outside of PAXU. 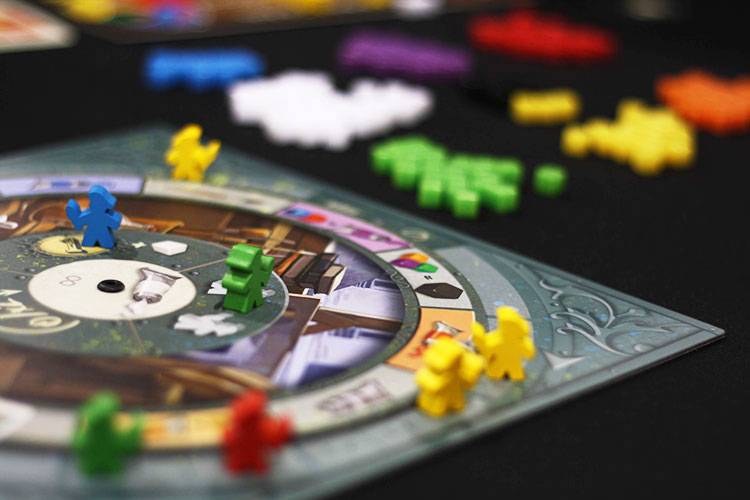 Yet again The Enforcer staff showed why they should be the standard for all conventions. Generally helpful and positive, it’s clear that they take pride in the work that they do, working to ensure everyone has a great convention. It was nice to see a few in the First Look area who remembered us from last year—it helps build that sense of community. However, we did encounter a few issues regarding entry into the expo hall on Sunday, with the Enforcers in that area having to enforce a traffic change that had not been in place Friday or Saturday. Not enough to ruin our convention, but we would hope for some better communication in the future.

The big negative to the convention weekend was the entries into the Convention Center themselves. We understand that this is a PCC issue and not a PAX issue, we had nothing but negative experiences waiting on and going through the security lines. While we recognize the need for ensuring a safe environment for all convention-goers, we hope that in the future the organizers address what was questionable security measures while maximizing the number of entries and egresses into the convention center.

What’s missing from PAXU? The availability of gaming space in nearby hotels, not just in the convention hall. While we loved the fact that the Free Play areas were expanded, give people the option of being able to play their newly purchased games in the comfort of their own hotel. We know that this adds another financial consideration, but it is something we would love to see.

If you are coming to PAX U next year, you should…

…be ready to jump into games in the First Look area. This is one of the first conventions that has the new hotness from Essen ready to hit the table, so be ready to move quickly to that title you’ve been reading about on BGG.

…think about booking your hotel earlier than usual. It’s the weekend of the Philadelphia Marathon, so be on top of your lodging.

…plan out your parking situation in advance, if you are driving. You don’t want to be cruising for a spot while your friends are playing all the sweet games in the Games Library. 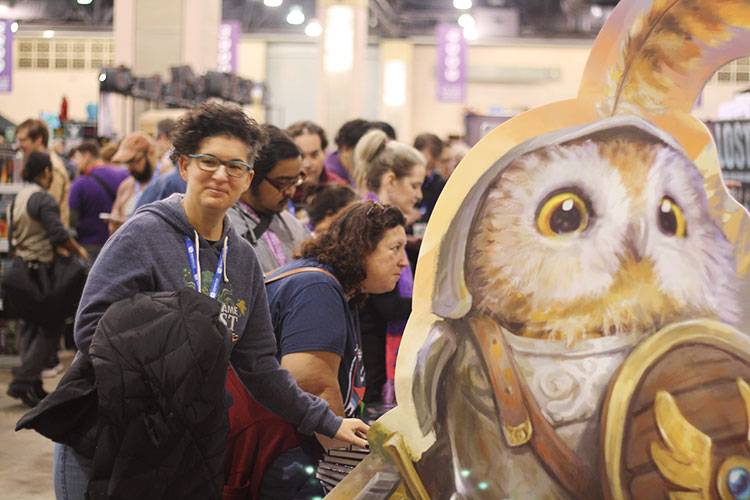 …make dinner reservations in advance. Lunch can be gotten from plenty of the local spots, especially the Chinatown area which is right around the corner from the Convention Center.

…skip the dealer hall, if you will have gone to Gen Con or Origins in 2020. Spend more time playing games and less time browsing for deals. Unless, of course, roaming the dealer hall is your jam, then you do you.

We’d love to hear from you about your PAX Unplugged experience! What games did you play? What was the best thing you ate, and was it the roast pork sandwich from DiNic’s? What would you tell the PAXU newbie or the seasoned and grizzled veteran? Chime in below and let us know!